As you will have realised from Newsletter 1, following the success of the inaugural “Shamrock”, the team responsible was sufficiently encouraged to stay on board for 2019. It now considers itself to be a reasonably well-oiled machine and, as such, there is very little of significance to report on herein. Consequently, I need to deviate in order to provide you with something to peruse. 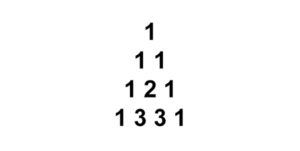 If you fancy a bigger one, try to construct it yourself
with another two “lines”.

In one of the early Newsletters during the run-up to last year’s event I was confronted with a dilemma. I can’t remember what this was but I did avail of the mathematical interpretation of “dilemma” to digress into lemmas and corollaries. Not being possessed of a great imagination I have decided that my space filler, totally unjustified this time, will be another mathematical excursion. In a nod to our even more cosmopolitan than last year competitors I propose to expose you to some of the delights of Pascal’s Triangle. Blaise Pascal was a 17th century French mathematician/physicist. Such was his contribution to the understanding of fluids that the SI unit of pressure is named after him. He is also commemorated for his mathematical exploits, courtesy of the above-mentioned eponymous triangle. The triangle, a modest example of which is shown to the right can grow as big as you wish to make it. 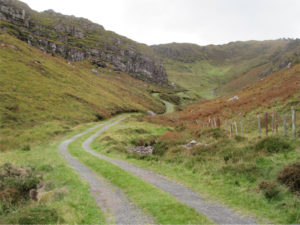 Regularity sections to rouse you

Back to more germane news. The two Michaels, Mick and Mickey – or Jackson & Gabbett, depending on your disposition, have been doing some resolute recceing. Regularity sections to rouse you in a route to delight you have been provisionally established. This section of road will definitely be included. Those masochists among you who enjoy exploring courtesy of Google Street View might like to go looking for it to seek out some perceived advantage on the event. It is in either Co. Cork or Co. Kerry. 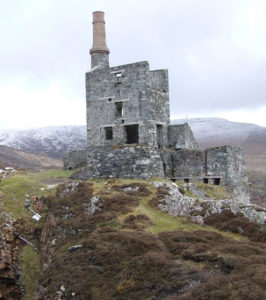 Another landmark which you will encounter on your travels is what remains of the Allihies Copper Mine. Mining was started here in 1812 by John Puxley, a local landlord. Initial mining began with a tunnel or adit driven into the quartz lode from the beach below. In 1821 two shafts were sunk. Flooding was a continuous problem and in 1823 the engine house was erected to house a steam engine brought over from Cornwall to pump water from the depths. The remains of this building with the base of the chimney can be seen in the photo. There is also evidence of a steam powered stamp engine to the left of the chimney and dressing floors in front of the engine house. All the rubble on the cliff at the sea side of the road is the crushed useless quartz rock left over after the copper was extracted. 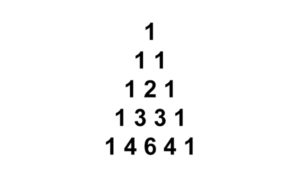 Now add up the numbers in each line.

This is one of six productive mines in the Allihies area and continued its operation until 1838 when it closed due to failing ore. John Puxley died in 1860 and in 1868 his son, Henry sold the mines to the new Berehaven Mining Company who reopened the mine and installed a new 22 inch steam engine in 1872. Little ore was produced though in this period and the mine was finally abandoned in 1878. Those of you of a literary bent will be more interested to learn that Daphne du Maurier lived on the Beara Peninsula for a while. During this period she wrote “Hungry Hill” which follows the fortunes of a tin mining family in Cornwall. This was based on the Huxleys and there is a “Hungry Hill” in the vicinity. 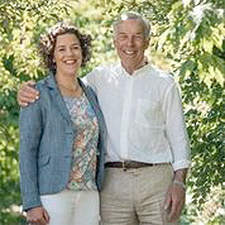 Potential pitstop and test venues continue to be evaluated. Those of you who appreciate timeless elegance – I suspect most of you, given your stylish steeds – will be pleased that “Magee” are once again offering support. The shy, retiring Rosy, who joined us at the Awards Dinner in May this year, will be weaving away between now and next May. As you can see from the photograph, her dad, Lynn, is of a similar disposition. The location is Salthill Pier adjacent to the family home in Mountcharles, Donegal. 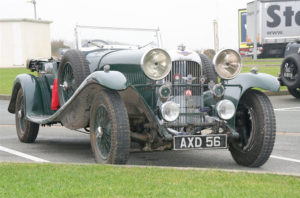 James Mann will be back with “Josephine”. I hope she behaves herself and doesn’t succumb to a fit of jealousy as he is bringing Tracey Mikloucich with him this year, rather than his brother, Andrew. James has kindly provided a bit more information about “Josephine” than he did last year. I have reproduced this below:

This Lagonda M45 tourer was registered by T.C. (Conrad) Mann on 7th February 1934. He was a regular competitor in the big pre-war rallies and AXD56 competed in the 134 and 1935 RAC rallies. He achieved a gold award in 1935. He also was placed 60th overall in the 1936 Monte Carlo rally, having had an “off” in deep snow in Scotland with his brother at the wheel, and suffered some mechanical problems. He and his brother, Cig, started in John O’Groats.

The Lagonda M45 was introduced in 1933 and was the largest sports car made in England at the time. This Meadows-engined (4.5l) tourer is a rare one-familyfrom- new car bought by the aforementioned Conrad who specially ordered the vehicle to be fitted with the earlier 3-litre type of body (T5) rather than the one normally fitted to the 4.5-litre chassis (T7) as it gave more space and comfort when rallying. It is believed that Lagonda made three M45 tourers with the T5 body, but the other two are not thought to exist any more.

Conrad used Josephine as his everyday transport to and from the Albion Brewery in London which was his place of work from 1946-72, but did not take part in any more rallies. Josephine was given to James and Andrew’s father, Richard, in 1988 and had by then covered 331,000 miles. It was now in need of a running restoration and this gradual process took about 10 years to get the car into good driving condition. One objective was to re-enact the Rally of 1936 and once again drive her to Monte Carlo, which was achieved in 1998 in the CRA Monte Carlo Challenge. The Monte Carlo Classique (2016) has given James and Andrew the opportunity to re-enact the John O’Groats start 80 years later. Josephine has been used very regularly in rallies and tours over the last 20 years.

James and Andrew competed in her on the first Shamrock Vintage Challenge in 2018 which was a wonderful introduction to Irish hospitality. Josephine has covered over 9000 miles in 2018. 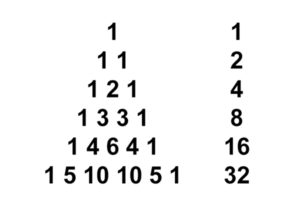 The Entry List is filling up steadily. For those of you reading this who are not yet on the list and wish not to be disappointed, prevaricate no longer – swing into action NOW. Below you will find a few more of the cars that will be complementing the beautiful south-west of Ireland in May. You can look forward to more Pascalian revelations like those on the right in the next Newsletter! 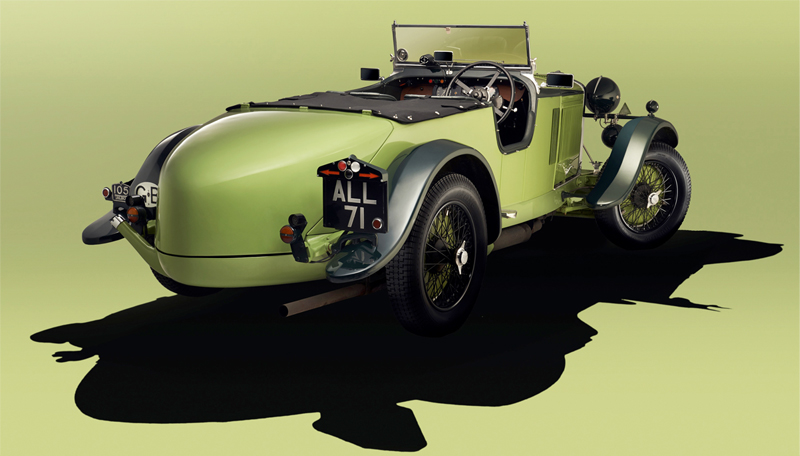 James & Katy Tibbits’s Talbot AV105 Brooklands which
has been fully restored by marque specialist, Ian Polson.
It is now used extensively across Europe, including
rallies in the Alps and Pyrenees. It has completed two
Flying Scotsmans 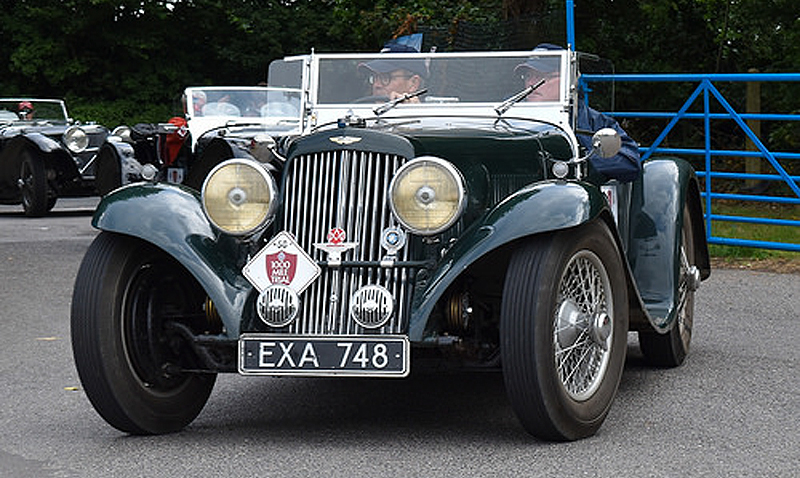 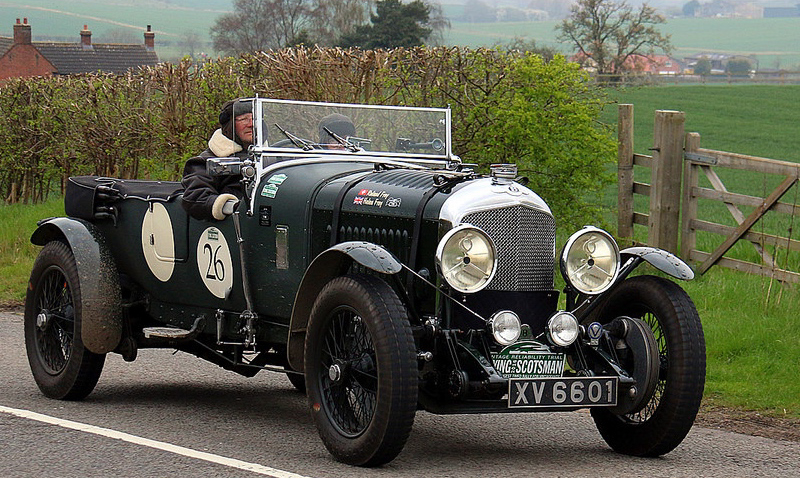