It’s been such a long time since I have been in touch that the contents of my inkwell had evaporated. Fortunately, there was a residue which, when refreshed with some water, has enabled me to string a few words together. To what end I’m not sure – I suppose some reassurance that arrangements for the Shamrock are evolving is welcome. This presumes, of course, that what follows is non-fiction.

The most important development since we last met is that Mickey Gabbett is now a grandfather. Kitty Delaney Gabbett emerged in August. Others in the organising team have had interventions to improve their functionality – I will spare you the gory details – suffice it to say that your needs will be catered for in an even more efficient manner than they were in 2018.

Speaking of needs, this year’s accommodation arrangements are first-class. The Sheen Falls Lodge is a superb hotel which is sufficiently bijou for there to be no guests other than those associated with the Shamrock Vintage Challenge. As I write, our leader, Shane Houlihan & Zuzana are enjoying a fortnight touring Ireland’s perimeter in Shane’s 1929 Blower Bentley He is in the company of five other like-minded and similarly mounted couples. I suspect that he might be wandering off-piste occasionally to explore potential routes/destinations – not only for the 2019 event, but for future iterations as well. 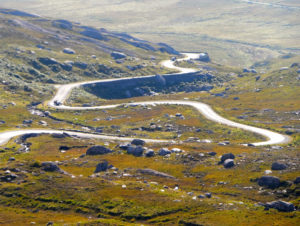 All is fluid at the moment regarding tests/ regularities but I can reveal that you will be visiting Blarney Castle for a test in the grounds. I’m sure a kiss of the Blarney Stone can be arranged as well if you are sure your immune system is up to it. In deference to the 2018 post-event questionnaire “stately home” visits will be more cursory this time. Also, there will be no “joker” facility for the regularities. The territory available for these latter in this part of the world is fabulous. When the Circuit of Ireland Rally was in its prime, special stages across the Tim Healy Pass and through Ballaghbeama Gap (sheep not guaranteed) amongst many others, were legendary. Maybe we might allow you to drive over some of these at your own pace and use more mundane byways for regularity purposes. It is great to see so many of you coming back for more and, of course, those of you who will be Shamrockly challenged for the first time. 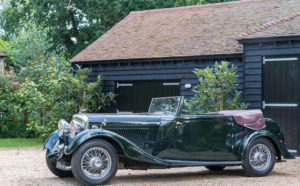 We are grateful to those of you who have responded to the “Background Box” on the entry form. Some of the information from there is presented here. The Rito Mebes/Hans Jürgen Benze 1934 Bentley Derby has had three owners since new. It boasts a rally history too extensive to include here and carries its original registration number. 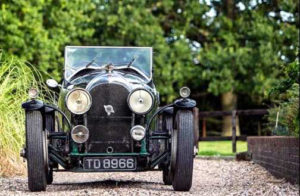 Graham & Marina Goodwin’s Bentley Corsica is an original bodied car from 1933, built by McKenzies. It raced at Brighton, Donington and took part in the RAC rally in 1939. It features a D-type gearbox from the first original Blower Bentley. It was restored this year by William Medcalf. The Goodwins are seasoned competitors. They have taken part in the Flying Scotsman, the 1000 Mile Trial, the Rally of the Incas, the Baltic Classic and the Himalayan Challenge. 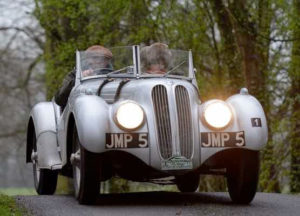 Gavin & Diana Henderson’s Fraser Nash BMW 328 was one of the first five to be imported into England in 1939 by Fraser Nash who were the exclusive dealers for BMW in England. It was purchased by A.F.P. Fane, a then well-known celebrity racing driver and aviator. In 1938, driving for BMW, he won his class on the Mille Miglia. He also raced it at Brooklands, Crystal Palace, Shelsley Walsh and other venues. Fane won the RAC Rally in 1939 in JMP 5. The Hendersons have competed in the Mille Miglia, the Goodyear Revival, the Hampton Court Royal Concours as well as four Flying Scotsmans (Scotsmen?) and an Alpine Trial. In another rally car, they have competed in a trans-America rally, an Inca rally, an African Safari and a Sahara Challenge, as well as a number of shorter events. 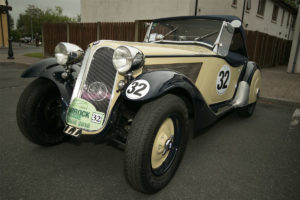 Irvine Laidlaw’s BMW 319/1 Roadster was sold in 1935 in Munich and taxed for road use until 1938, by which time the registration document was stamped with swastikas. Little is known of the car’s history other than that it was in Cologne in 1949. Rescued from partially dismantled and poor storage conditions in the 1990s it was totally restored by dedicated enthusiasts using a mainly new wood frame and all original body panels. Little used until bought by Irvine from a German dealer in 2014, it is just one of 178 examples of the 319/1 Roadster built. Irvine came second in the 2018 Shamrock. He is hoping that Tony Davies will help him to go one better in 2019! 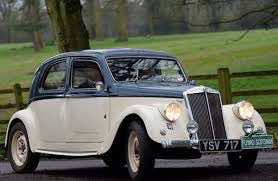 Fred Gallagher and Neil Oatley will be bringing a 1939 Lancia Aprilia. Whatever about the car, the Shamrock Vintage Challenge 2019 occupants certainly have formidable motorsport pedigrees. Fred was a co-driver for nearly all of the WRC/ERC/Cross-Country factory teams from the mid-70s till the late-90s. Neil worked for 30 years at McLaren in various capacities including engineer to Senna and Prost, Chief Designer from 1989 until 2003 when he became Executive Director of Engineering was race engineer to Senna and Prost.