I mentioned our “Magee” support in Newsletter 2. This time I would like to acknowledge the backing being provided by Robert Glover, who, much to his chagrin, will not now be able to take part. The good news is that Sholto Gilbertson of Bonhams has managed to locate an homologated pre-war baby seat and will be joining us. We have another benefactor on board for the event. Anthony Tindal with his eponymous Wine Merchants has been persuaded to offer support.

M&M have been out and about again. M&M are, of course, C-o-C Michael and his muse, the Machiavellian Mickey. Even though both have sweet temperaments, they are not to be confused with the more usual interpretation of M&M. In 1941, Forrest Mars Sr., of the Mars candy company, struck a deal with Bruce Murrie, son of famed Hershey president William Murrie, to develop a hard-shelled colorful button-shaped chocolates branded as “M&Ms”. After another couple of days in the scenic south west they have identified sufficient test locations and regularity routes to keep you entertained. Indeed, so diligent have they been that some culling may have to be done so as to avoid keeping you up too late! 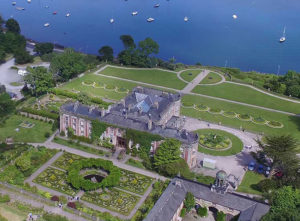 There is a gathering consensus that classic Circuit of Ireland special stages like Borlin and the Tim Healy Pass should be free driving sections. This will give you a choice: meander and enjoy the view or motor on in a bid to emulate the stage rally heroes of yore. A happy medium is recommended. Without revealing too much, there will be tests at Castlemartyr, am and pm. Also, at the stunning Bantry House, where afternoon tea will give you a caffeine boost for the driving challenge. 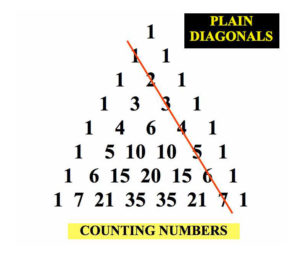 You probably hoped that I might forget about Pascal – I’m sorry to have to disappoint you. Incidentally, the “solution” to the second of the last Newsletter’s posers was compromised by the transition from my pdf submission to whatever arcane “language” our web guru employs. The “20 21 22 23 24 25” ought to have appeared as “20 21 22 23 24 25”. The first revelation this time is mundane, I will concede. 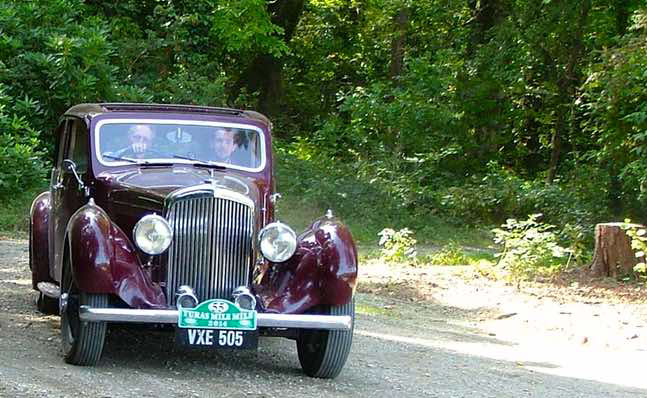 Paul and Georgiana Keane’s fabulous Inish Beg will also be on the agenda.

Just to keep you guessing and maybe inspiring some of the more enthusiastic navigators to do some detective work, below are two images which might be relevant to proceedings.The Entry List is now full. If any casual readers of this epistle are keen to compete, there is a Reserve List to which your name can be added on receipt of a completed Entry Form. 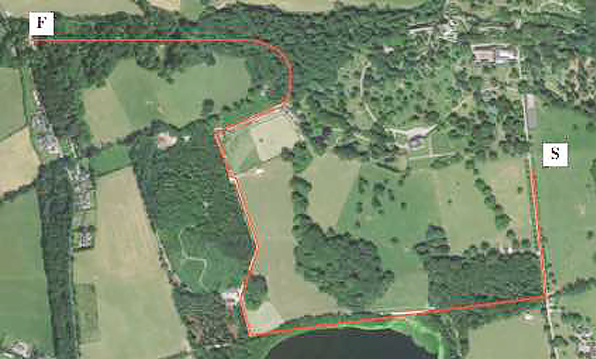 The C-o-C has been shopping recently. He has acquired a robotic vacuum cleaner so he can spend more time getting everything right for you without compromising domestic hygiene standards – these are as lofty as all of his other norms. As with most, if not all panaceas, there is a side-effect. The machine demands that Michael’s wifi is exclusively at its beck and call while working. So, if attempts to contact Michael are fitful, you can rest assured that his and Mary’s house is spotless. PS The dogs are not too impressed with with the newcomer. A few of you have apprised us of “Dietary Requirements”. I would like to remind you, I suspect unnecessarily for the informed imbibers amongst you – a majority? – that whisky is “Scotch” and whiskEy is “Irish”.

You may have noticed that our Supreme Leader, Shane isn’t mentioned much in dispatches. This is not because his input is less worthy than others. Rather it is because of its ephemeral nature – it is difficult to write about “encouraging” exchanges with prospective competitors and establishing fruitful connections with memorable places to visit. His contribution, no less than the other principals, is invaluable.

Once again, I have some traveling companion snippets for your edification. 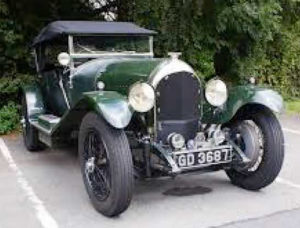 John Hickman is a semi-retired chartered surveyor and property developer, once a developer. His wife, Catherine, is an historian as well as keen mother and grandmother. John enjoys other vintage and veteran cars. The Bentley has no history of importance but runs jolly nicely!

The Rakers’ Ford Model A

The Rakers’ Ford Model A has taken part in the 2010 Peking-Paris, 2013 Buenos Aires-Ushuaia, Paris-Madrid, Paris-Vienna and the Tourais Irish rally. John & Melinda, when rallying, are usually in the picnic basket/gardening category although Betty Ford was second to a Bugatti on the speed tests on the Tourais rally and fourth in the Benjafield Bentley Stubble Racing Day. 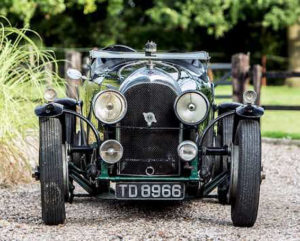 TD 8966 is an original bodied car from 1933. Built by McKenzies, it raced at Brighton, Donington and the RAC Rally in 1939. It has a D-type box from the first original Blower Bentley. It was restored in 2018 by William Medcalf. The Goodwins have competed in many rallies including the Flying Scotsman, 1000 Mile Trial, Rally of the Incas, the Baltic Classic and the Himalayan Challenge. 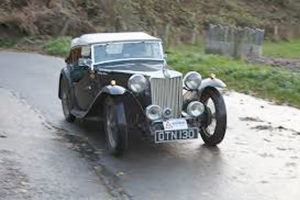 Vincent Fairclough has competed in his MG TC on many rallies since 1993 including the Peking to Paris, Rally of the Incas, Monte Carlos, Le Jogs, Winter Trials etc. Vicky has been navigating since 1998 on Classic Marathons, Liege-Rome-Liege, Flying Scotsman etc. 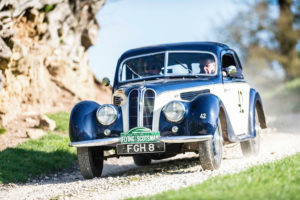 Detlef Heyer’s Frazer Nash-BMW was built in September/October 1938 and delivered to A.F.N. Limited, Falcon Works in London. It was first registered in November 1938 to Mr C.B. Cave of Warwickshire. According to the records of John Giles, the UK BMW specialist, there were only 19 FNBMW 327/28 Coupes ever built – only 9 still exist. This particular car was used after WW2 for Hillclimbs and Speed Trials in the UK. Detlef bought the car in 2012 from J.R. Stokes in Ipswich who had owned the car for the previous 24 years. In 2013 Fa. Feieraben, Wuerzburg, Germany did a full overhaul. Since then it has performed well in many international rallies. 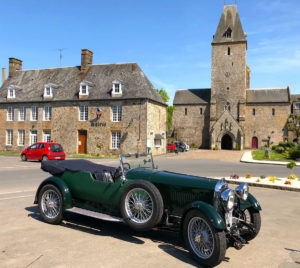 Roland & Helen Frey have discovered logistical hurdles since the last Newsletter and will now be bringing their 1931 Lagonda 3-litre. 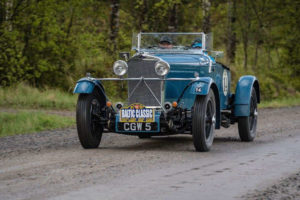 It is great to have the full complement of Bolands back again. In Talbot AV105s are Andrew & Ann, pictured above (courtesy of Gerard Brown), Anthony & Orla and Jim & Mary. Diarmaid & Fiona will be in a Talbot 110. 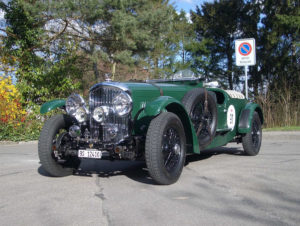 Urs & Susanne Müller are bringing their Bentley -details below. After the takeover by Rolls Royce in 1931 no Bentley racing cars were built anymore. There was a strict No Motorsport policy. E. Hall, a well known English driver, begged Rolls Royce for three years to produce a racing car and eventually they gave in. For the 1934 season W.O. Bentley at RR constructed two cars for him. The body was built by Abbott of Farnham who were also responsible for the contemporary Alfa Romeos and Lagondas (the rear ends look similar). The specifications of the car are:

This information was translated aus Deutsch by my son’s brother-in-law, Carsten. 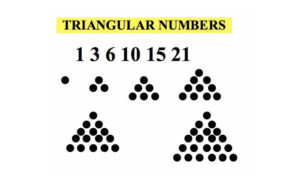 The second Pascal disclosure is, I’m sure you’ll agree, more interesting. Yes! Next time you are in for an even more fascinating treat as we will be looking at the ALMOST DIAGONALS