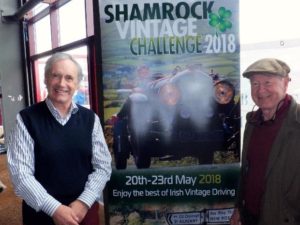 I visited the IVVCC Festival of Transport  and was delighted to see Michael Jackson with a prime pitch close to the entrance of the Main Hall. He had a steady stream of visitors during the day, including Henning Thornsen from Denmark.  He seemed interested but would be more likely to enter if another three countrymen came along with him to make the logistics a more viable proposition.  Maybe he could use a LEGO car – bring the pieces in suitcases and assemble on arrival?  Michael is pictured here extolling the virtues of the Shamrock Rally to well-known Irish rallyman, John Farrell.