The well-oiled machine that is Shane, Mickey and Michael should now have been about to engage top gear so as to cruise through the tour-de-force that the Shamrock Challenge 2020 promised to be. The vagaries of life on Earth are, I suppose, what makes it so stimulating. The caprice that is Covid-19 has proved to have had a rather more pervasive effect than our usual random global changes in circumstances.

Good news is that the plan to run the event in 2021 will allow the treats that had been prepared for you not go to waste. The Dunloe Castle Hotel has been booked so that is the main consideration from an organizational point of view taken care of.

It has been a long time since Newsletter 1 appeared. The details still hold. This second missive will whet your appetite with some information about interesting places we will be visiting and passing by/through. While many of you will be able to join us next year, there are some whose plans are sufficiently far advanced that they know already they will be otherwise engaged. Hence, I will refrain from including bits about cars/competitors. It should be reassuring for those who will be making it, and for those who may decide to add themselves to the list, that the team behind Shane, Mickey and Michael remains intact so that you can look forward to the same “super service” as heretofore. 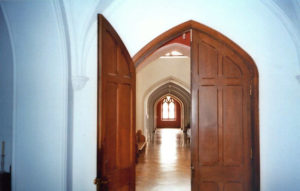 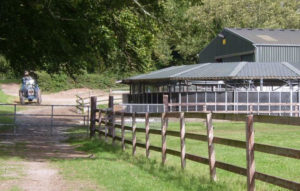 Starting in Clonmel, there will be an afternoon in its vicinity. This will include a visit to Mount Melleray Abbey, a community of Cistercian (Trappist) monks. The monastery is situated on the slopes of the Knockmealdown Mountains in Co. Waterford. On Monday there will be a close-to-shortest route west to Killarney. Grove Stud is situated on 75 acres of fine limestone land and has thirty five stables. North Cork is world famous for its equine history and the numerous studs here have reared many Grand National Winners as well as inventing the Steeplechase! 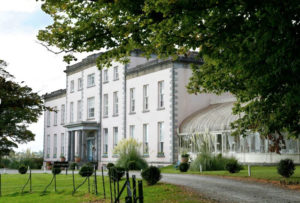 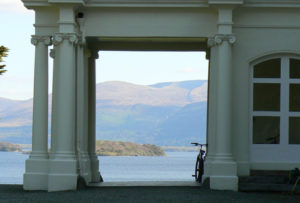 Longueville House is a stunning year-old listed Georgian Country hidden in the heart of acre wooded Blackwater also North Just before we arrive Dunloe Castle be popping to Lakeview House. Steeped in history and character, the House has long been linked to the family of Daniel O’Connell (a huge figure in Ireland’s 19th century history, known as “The Liberator”), and to the famed MacCarthy clan. 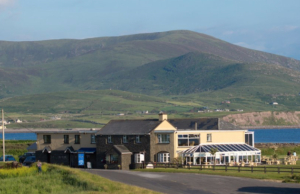 Day 3 brings us around the “Ring of Kerry” on the Iveragh peninsula. We will pass through the Macgillicuddy Reeks and skirt the highest mountain in Ireland, Carrauntoohill. We will also drive over classic Circuit of Ireland stages like “Caragh Lake” (and on the final day, “Conor Pass”). On the outskirts of Waterville, The Smugglers Inn sits on the edge of the Kerry coastline along 2km of beautiful sandy beaches. Built in 1779. The restored farm house spans five generations of food, quality and Irish tradition. 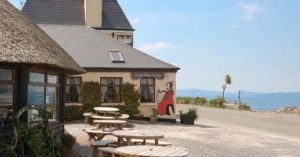 Kells, on the north side of the peninsula is a traditional fishing village. Golden’s is the local hostelry for the discerning. The Iveragh based bar was originally known as The O’Connell Arms courtesy of its links with one of Ireland’s more famous sons, Daniel O’Connell. O’Connell would have stopped off here when he travelled between Caherdaniel (further west) and the Dublin Parliament. 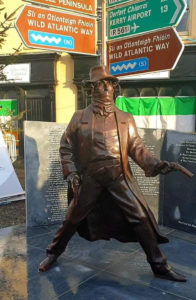 The grand finale will be on the Dingle Peninsula. We will pass through Castlemaine twice during the day. In pride of place in the town is the bronze statue of “The Wild Colonial Boy” thus named because of the eponymous ballad. Legend has it that Jack Duggan, also known as “Bold Jack Donohoe” was born in Castlemaine in 1806. In 1824, aged 18, he was convicted of “intent to commit a felony” (probably rebel sympathies or connections) and was sentenced to be transported for life to New South Wales. He had a chequered career which resulted in his becoming one of Australia’s most celebrated bushrangers. On1st September 1830, a group of soldiers and police caught Donohoe and his gang near Campbelltown. During the battle Donohoe was shot dead. 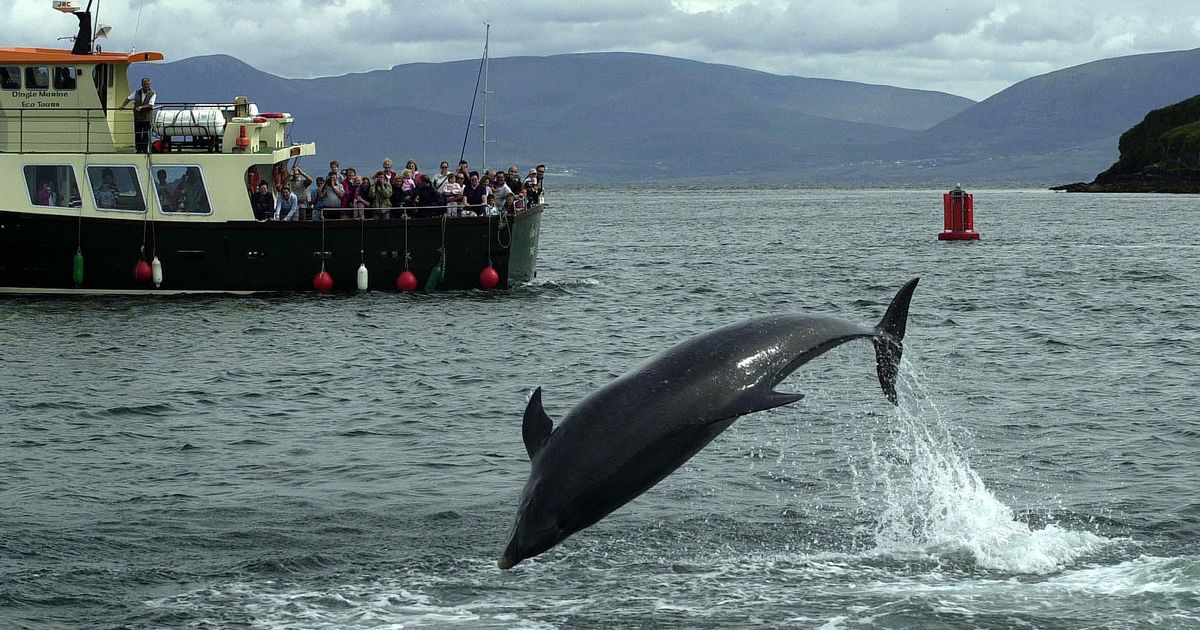 Dingle is a small port town on the Peninsula, known for its rugged scenery, trails and sandy beaches. Its best known tourist attraction is Fungie, the dolphin,who lives in the local waters and is almost tame at this stage. It is also celebrated for the “Other Voices Music Festival” which has a spin-off TV series called “Other Voices”. This is filmed in the intimate setting of the 200-year-old Church of St James. Performers, of whom I have heard, include Duke Special, Billy Bragg, Elbow, James Morrison, Lisa Hannigan, Mick Flannery, Imeld May & Snow Patrol. 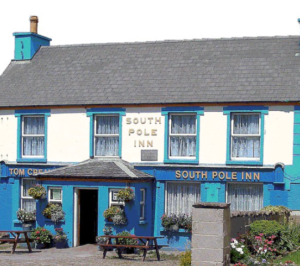 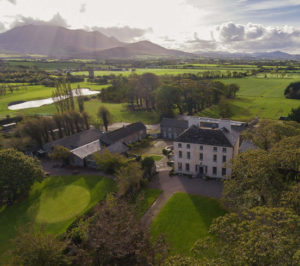 The SOUTH POLE INN, located in Annascaul, contains a collection of Tom Crean memorabilia. As well as paying tribute to Tom Crean the Antarctic Explorer, the South Pole Inn now commemorates the village’s other famous son: Jerome Connor, a major Irish-American sculptor. A purpose-built gallery exhibiting his work was opened in April 2014.

We will be finishing up in the 18th Century Churchtown House situated in the foothills of the Macgillicuddy Reeks. The house was built in 1740 by Sir Roland Blennerhassett and has been in the Magill family since 1860. The house sits alongside Beaufort Golf Course, in the clubhouse of which we will be drowning our sorrows (or otherwise).

I’ll be in touch maybe later this year but definitely in 2021.

You may remember in Newsletter 1 that Leonhard Euler had been selected to divert you from the more relevant matters motoring. Unfortunately, his ‘Line” saga would be too protracted to include here to its conclusion – I will leave it as something for you to look forward to in the build-up to the 2021 Shamrock!
So as not to disappoint the mathematically curious amongst you I am offering you some observations on Euler’s Number. SCROLL DOWN to be amazed!

No matter how enthusiastically you refine your estimate you never get it spot-on. In situations like this the number is termed irrational.

Irrational numbers crop up in lots of situations. You will probably have come across π, the ratio of the circumference and the diameter of a circle. Again, an exact number cannot be found. As above, a practical value of 3.1416 can be useful.

Euler enjoyed investigating situations which give rise to irrational numbers. What makes him special is that he discovered a number of apparently unrelated scenarios which generated the SAME irrational number. The genius of the man is how he formulated this very theoretical “stuff”. In deference to his work this number is annotated e. That e is the first letter of exponential is serendipitous as Euler loved his exponentials.

Like the above irrational numbers, there is no exact value for e. 2.7183 is close.

Before I start describing situations in which e plays a part, it does have a random quirk in a more accurate approximation than the one above – 2.718281828 which has an unusual feature in that the digits 1828 are repeated.

Another day, Euler was contemplating the elegant looking mathematical expression below and he started putting numbers into and working out what it was worth. This is what happened.

If you can cast you mind back to your school days and were fortunate to have done calculus, you will remember that it came in two varieties – differential and integral. The easier was differential and you may remember doing stuff like this.

Euler enjoyed this branch of mathematics but came to wonder if there was some mathematical expression which had the same derivative as itself and yes, you’ve guessed it – he found one. It was “his” number to the power of x. ex