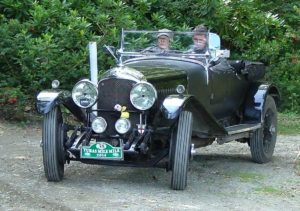 I write this not long after the conclusion of the Wolseley Car Club of Ireland’s Annual extravaganza (22nd edition). I was part of the organisational crew led by the super-efficient Philippa Spiller, ably assisted by Andy Bailey. The event was based in Wexford so Andy & Philippa will have been able to get a feel for territory similar to that which will be encountered in May. While the “Wolseley” does require an occasional potato to be tossed into a bucket there are some jogularities and conventional tests to challenge the crews. Others getting “into the zone” – approaching it may be a fairer assessment – on this event were Robert Glover, Peter Little & Louise Cartledge (above left with Louise at the wheel) and Eric & John Kavanagh (below right) . Key member of the Shamrock organising team, Mickey Gabbett, also took part taking a class win with Edwina Gaisford St. Lawrence in his Alvis 12/60. This was despite Mickey’s “con brio” driving technique (his default approach) generating enough turbulence for a time card to become airborne and seek permanent refuge in an adjacent field. 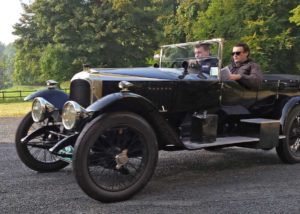 The “Wolseley” is sufficiently relaxed that this is not the catastrophe that it would be on other events, Shamrock included (!), as the results team used marshal check sheets to determine their penalties. Fellow Shamrock organiser Michael Jackson marshalled on Day 1 whereupon he absconded to fulfill his Dolomites commitment with Frank Fennell on the SeaSun Rally, as mentioned in the last bulletin. Let’s hope that Michael’s renewing of his navigational skills will inspire him to devise a testing but fair challenge in May. 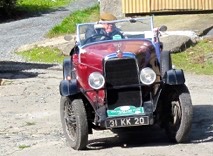 Many entrants went to the trouble of providing some “background” when completing their entry forms. I will share some of this information below and in subsequent bulletins.