It’s looking like there will be some serious competition for honours in this year’s Shamrock. A perusal of the recent Flying Scotsman results reveals quite a few competitors who will be taking part in this year’s fray. Significantly, there is a high proportion of the “Top Ten” coming our way. Crews, Andrew & Philippa Bailey were sixth and Stuart & Emily Anderson were eighth. Drivers Paul Dyas and Peter Neumark were fourth and seventh – no pressure on Martyn Taylor and Nick Fry then! Also worthy of mention are David Thomson and Trina Harley who made impressions behind the wheel and on the maps, respectively and separately. Incidentally, it was good to see that inaugural Shamrock Vintage Challenge winner, John Abel is back in action again – he hasn’t lost his touch either. 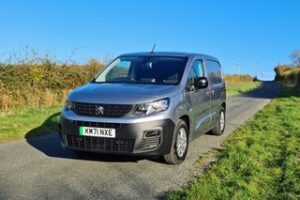 Anyway, on to matters more mundane – some barely relevant piffling minutiae which is supposed to whet your appetite but, I suspect, might be more effective as a soporific. I recently had the good fortune to accompany Mickey Gabbett on the final full run-through of the route in his trusty and, particularly well-suited for the task, Peugeot Partner. There were encouragingly few amendments to be made.

One of our tasks was to mark the time points so as to facilitate their location by the marshals. Shy, retiring Mickey chose for this exercise a discreet fluorescent pink aerosol spray. While this has the advantage of being clearly visible to the officials, it can be misinterpreted. Indeed, one of “our” landowners brought the one outside his gate to the attention of the “Gardaí” fearing that his house had been marked as being worthy of the nefarious consideration of local “ne’er-do-wells”. 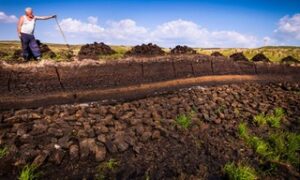 A journey with Mickey can be very enlightening – in all sorts of ways! For instance, we were tootling along in the vicinity of Johnswell, Kilkenny when he pointed out a bare field which he had previously populated with sitka spruce in 1989. He had sold on the forest and he was delighted to see that another cycle of tree planting was about to start. Incidentally, the proceeds from this sale were used to purchase a “few acres” in Roscommon. Inadvertently included with the land that he had bought were the turbary rights to half an acre of bog quite a distance away. The error was rectified but I thought you would like to have “turbary” explained. Bogs come with turbary rights which were granted to the original owners of bogs in Ireland many years ago. Irrespective of the ownership of the land subsequently, these turbary rights remain with the original grantees. They permit the holders to cut the turf in the bog on the land, albeit for their own private use only. A quaint Irish anachronism. 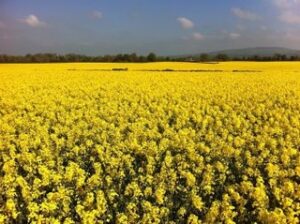 We dropped in to Rob Coleman whose land we will be traversing during the event. Mickey had an interesting discussion with him about a field we had passed before we bumped into him. Mickey had noticed that spring oilseed rape had been planted and wondered why Rob had done so as Mickey thought that winter rape would be a better proposition. As it turned out, such has been the lack of rainfall over the last few months that conditions weren’t appropriate for the sowing of the winter variety so Rob was crossing his fingers and hoping for the best with his spring venture. We visited Tom Shine in Ballylegan, one of the test venues, and Mickey waxed lyrical about Tom’s innovate approach to making “farming” more viable. He has an extensive “mill and mix” operation which generates animal feed. He also has drying floors which remove the moisture from sawdust, bark and woodchip which renders them a much more saleable proposition. 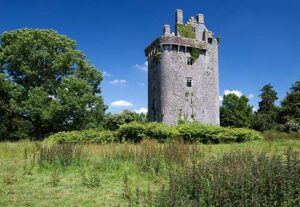 Another of Mickey’s interests is old buildings. The more castellar the better, though he eulogises about what looked to me like pretty run-down and derelict dwellings from the past almost as much as he does the more spectacular edifices. One of our hosts, John Cott, lives very close to the magnificent (Mickey’s opinion) Lohort Castle. It is one of those hidden gems which remain largely inaccessible to the general public. It is situated on the Castlelohort Demesne near Cecilstown in County Cork. and is an impressive five storey fortified tower with rounded corners, standing over 80 feet tall. The massive walls are 10 feet thick at the base, narrowing to six feet. Around the top storey there is a machicolated parapet that runs unbroken apart from a short section on the eastern side. There used to be a deep moat around the castle with a drawbridge. The castle grounds cover more than 100 acres. It was built around 1496 by Donogh Óg McDonagh McCarthy. The castle was taken by the Irish forces during the Civil War. One of the bloodiest battles of the English Civil War took place on the grounds of Lohort Castle in in 1647 when over 4,500 men were killed in battle. Lohort was bombarded by Oliver Cromwell’s troops in 1650 and captured, but the castle withstood the cannon fire due to the immense strength of its 10 foot thick walls. The castle as it now stands was rebuilt around 1750 by Sir John Percival, the Earl of Egmont, and the Percivals lived there until the 20th century when it was burned down by the IRA in 1922. Some of the fireplaces from nearby Kanturk Castle appear to have been relocated to Lohort Castle – this was probably done when Lohort Castle was restored in the 18th century. 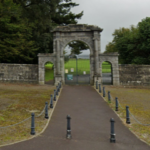 Along similar lines below is a picture of an archway into Doneraile Castle. It had been hoped that we might be able to drive through this arch and along some of the estate roads. However, such is the stagnancy generated by the multiple committees which run establishments like this, that we were unable so to do. In essence, the “authorities” worried that the arch might fall down as one of the cars was passing through it.

As you approach the final test of the event you will be directed around the back of the imposing Churchtown House where you will stumble upon the skeleton of an unfinished 120-bed hotel. What a fantastic location – surely the developers amongst you will be eager to snap up a bargain!!!

The extracts below from a piece in the Irish Examiner in December 2014 will provide you with some background. 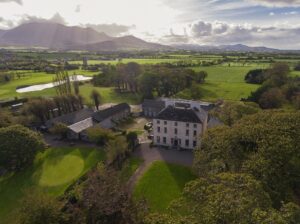 The package, with abandoned hotel hopes, and various permissions for a holiday development and golf academy is on 149 acres, with a further c 82 acres of farm-land, on the side of the MacGillycuddy Reeks. As an entire of 235 acres, it’s guided at €2m, on behalf of a receiver. It last changed hands about a decade ago, to local development company Galvins, who drafted ambitious multi-million euro plans for it, to include a golf academy, 70 golf lodges, 20 suites and 12-bed hotel with leisure facilities.Being marketed this week is the parkland Beaufort Golf Course, along with good land, in four divisions guided at €750,000, or €9,000 an acre, seven miles from Killarney: it has been billed as the hidden gem or secret golf course of the south-west, with captivating Reeks views. The original golf course opened in 1995 to a design by Dr Arthur Spring, since adapted by another designer Tom McKenzie, and it’s a 7,000 yard 18-hole par 71 course, which is GUI affiliated. It circles Churchtown House, which is not included in the sale, and which is still lived in by the Magill family who sold the privately-owned golf course to the Galvin company in the mid 2000s. Planning for the 120-bed hotel and 20 suites has now lapsed, and is part-built with four storey shell and roof in place. Also planned were 20 detached two storey golf lodges, and two courtyard developments, each of 25 units, plus nine-hole golf academy course, but no construction was undertaken on the latter elements. Lot 1 is 82.45 acres guiding excess of €750,000.

We are fortunate to have “our man in Waterville” in the person of Simon Harrison who has been responsible for “oiling the wheels” of our visit to the town. Below is an abridged version of one of his recent missives.

Shamrock 2022 – Update Report 2nd April 2022 DAY 3 – Iveragh – Ballaghisheen Pass, Waterville, Ballinaskelligs, Kells, Glencar. Mobile Coffee just below Ballaghisheen Pass.Wholly Dough – Julie Lee King – confirmed and price agreed. Deposit requested and SH meeting on 23rd April to recce location. Old Post Office/ChurchOwners John O’Brien (Father); Darren O’Brien (Son) visited on 5th March. Happy for route to pass through section of their yard. Need a reminder phone call beforehand. Met owner of White Cottage – wild bachelor farmer with long flyaway hair and pretty deaf and unintelligible. Had communication rather than chat but he is quite happy for cars to pass him. The track now has had some attention and a good surface. Since last report, the Waterville Meander route checked by the Michaels is viable. Bayview Test – now confirmed – entry via tunnel and exit beside Sea Lodge. May need to keep some space for the parking of the last 15 or so cars. Permission has been given to park cars on the grass in front of the Bayview. Note on Parking – the grass area opposite Sealodge is not suitable, however as per above permission now to hand to park on the grass immediately in front of the Bayview which should be good for about 15 cars. Sealodge will keep their front area free for parking which should take 24 cars max with double parking to both sides. Balance of parking therefore suggested for section closest to Sealodge behind Bayview. Parking in front of Sealodge circa 24 cars if managed. Co-Op Test (on road to Ballinaskelligs) needs to coincide with their lunch hour 1-2pm – all confirmed, requesting copy of insurance, which can be emailed to me. Afternoon Coffee Stop and Test TC 3/3 at Golden’s Kells is “ready to roll”. Refeshments will be Barrista Coffee (full menu) and Homebake – test on Glenbeigh side of carpark. Pub Stop at Climbers Inn for a pint has been agreed – expect they will call me to reconfirm. DAY 3 – Dingle. Lunch Stop in Dingle Skellig Hotel and test and parking adjacent overflow carpark across road confirmed. Soup and deluxe sandwiches.

Just a brief word about units. As you will be aware, courtesy of the Regs, the distances in the route instructions are given in miles. Not mentioned are the units of time which you would assume (correctly) are hrs.mins.secs. However, I had occasion to make a phone call to Newry recently and encountered a unit of time peculiar to the “North”: the “wee minute” – as in “Would you hold on for a wee minute please?”. Given that there are quite a few competitors from that jurisdiction, I felt it worth mentioning this potential pitfall so as to avoid any possible confusion. Neither, of course, will the less common “wee second” be used.

You will be relieved that my mathematical meanderings have almost come to an end. I will finish in this edition with a couple of vaguely connected whimpers. Is a µm a micron or one of these? (left)

There are only 10 types of people in the world – those who understand binary and those who don’t.
A T-shirt “design” I encountered recently
√-4 = 2
It’s all fun and games
until someone loses an i

P.S. A task, additional to an official’s timekeeping/observing primary function, is quite often chatting to the locals. The big advantage of the cars being “pre-war and the sensible regularity speeds (on the public road at least!) results in these being congenial affairs. However, occasionally, there can be some disquiet when drivers become a little bit over-enthusiastic when departing from time points so as to recover the time lost at the point. Please proceed in a fashion sufficiently demure to avoid umbrage. The TP locations have been chosen carefully so as to preclude the necessity to indulge in unseemly behaviour. 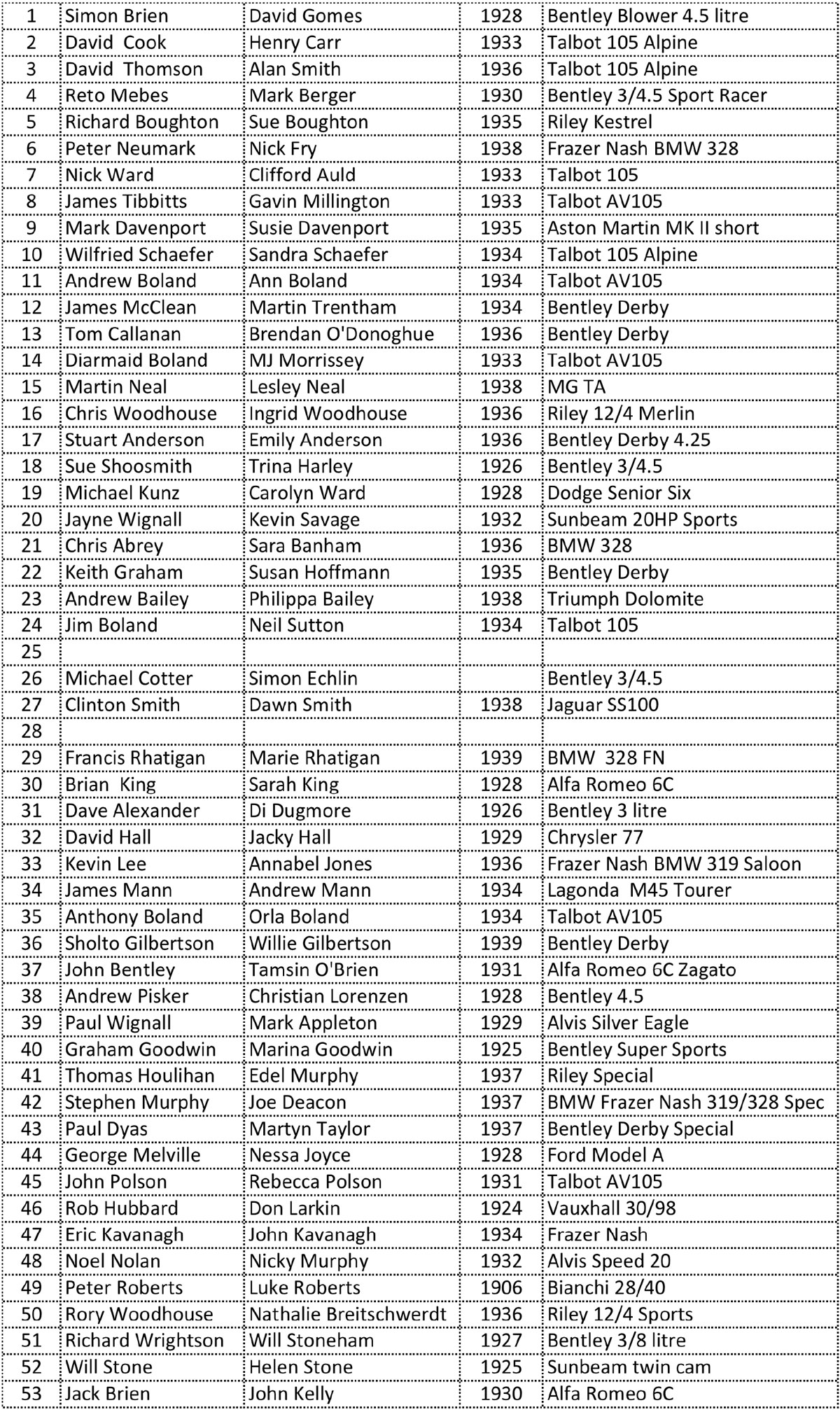