The main change in plans occasioned by the Covid hiccough is the Start location move from Clonmel to Kilkenny. This was referred to in Newsletter 1. It has, of course, had an impact on the originally intended route for Days 1 & 2. What follows is a random selection of snippets regarding the revised (and original) itinerary. There is also some competitor car news. 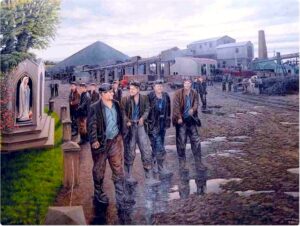 After lunch on Sunday, there will be a “lap” of Kilkenny including two regularities and four tests. You will pass over the Comer Plateau, which is notable for being the source of “the best quality anthracite in the British Isles, if not all of Europe”. While difficult to light, it burned for a long time, producing intense heat and very little smoke –  important at a time when many humble dwellings had no chimneys. (To misquote an old maxim, “there was fire without smoke”). Another luminary who was a fan was Winston Churchill. He was Admiral of the Fleet in WW1 and was appreciative of its facilitating his ships’ ability to “sneak up on” the enemy. Also worth mentioning is that your C-o-C’s great-grandfather and grandfather owned one of the more modest mines. Most of the over 600 men who worked in the mines in the 1950s and 1960s are now dead. Those that remain recall that health & safety safeguards amounted to little more than the statue of the Virgin Mary at the colliery gate.

Keep an eye out for Cantwell’s Castle (right). It is located in the townland of Sandfordscourt in the barony of Gowran, County Kilkenny. A former owner, Thomas Sandford, was Mayor of Kilkenny in 1723. On Monday, there will be a “close-to-shortest” route westish to Killarney. Parachutes will not be necessary for our visit to Ballyboe unless your conveyance has aerodynamic idiosyncracies which it attempts to flaunt during the airstrip test. More than ten seconds off the ground will merit a “fail”. There will be a coffee stop at Grove Stud. This is situated on 75 acres of fine limestone land and has thirty five stables. North Cork is world famous for its equine history and the numerous studs here have reared many Grand National Winners as well as inventing the Steeplechase! En route to lunch you will be passing through the wonderfully named Twopothouse townland. This is not to be confused with its more elderly neighbour Oldtwopothouse. Watch out during this section for Irish rally legend Billy Coleman whose “land” we will be passing through – we hope he won’t be coming the other way! 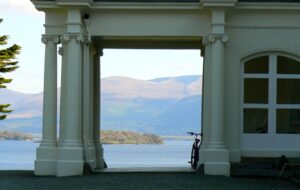 Sustenance will be provided in Springfort Hall. It was formerly known as Baltydaniel, an anglicised Irish name which translates as the ‘Town of the House of O’ Donnell’. Just before we arrive in Dunloe Castle Hotel, we’ll be popping in to Lakeview House. Steeped in history and character, the House has long been linked to the family of Daniel O’Connell (a huge figure in Ireland’s 19th century history, known as “The Liberator”), and to the famed MacCarthy clan. This is now the home of Sir Maurice O’Connell and is the location for the production of one of the newer Irish whiskeys, “The Liberator ”. O’Connell’s “Liberator” appellation was courtesy of his being responsible for (Roman) Catholic Emancipation – not just in Ireland but throughout the British Empire. (He was a bit of a globetrotter.) 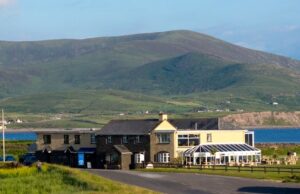 Day 3 brings us around the “Ring of Kerry” on the Iveragh peninsula. We will pass through the Macgillicuddy Reeks and skirt the highest mountain in Ireland, Carrauntoohill. We will also drive over classic Circuit of Ireland stages like “Caragh Lake” (and on the final day, “Conor Pass”). On the outskirts of Waterville, The Smugglers Inn sits on the edge of the Kerry coastline along 2 km of beautiful sandy beaches. Built in 1779, the restored farmhouse has seen five generations provide first-class hospitality. It is currently one of Ireland’s top seafood restaurants.Kells, on the north side of the peninsula is a traditional fishing village. Golden’s is the local hostelry for the discerning. The Iveragh-based bar was originally known as The O’Connell Arms, courtesy of its links with the aforementioned Daniel. O’Connell would have stopped off here when he travelled between Caherdaniel (further west) and the Dublin Parliament. 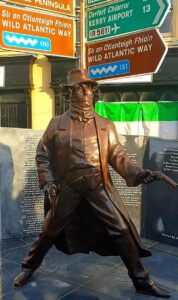 The grand finale will be on the Dingle Peninsula. We will pass through Castlemaine twice during the day. In pride of place in the town is the bronze statue of “The Wild Colonial Boy” thus named because of the eponymous ballad. Legend has it that Jack Duggan, also known as “Bold Jack Donohoe” was born in Castlemaine in 1806. In 1824, aged 18, he was convicted of “intent to commit a felony” (probably rebel sympathies or connections) and was sentenced to be transported for life to New South Wales.  He had a chequered career which resulted in his becoming one of Australia’s most notorious bushrangers. On1st September 1830, a group of soldiers and police caught Donohoe and his gang near Campbelltown. During the battle Donohoe was shot dead. 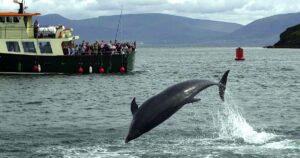 Dingle is a small port town on the Peninsula, known for its rugged scenery, trails and sandy beaches. Its best known tourist attraction for many years was Fungie, the dolphin, who lived in the local waters and was almost tame. Last year, however, Fungie decided to seek a change of scenery and departed for pastures new thus depriving the town of one of its tourist magnets. Dingle is also celebrated for the “Other Voices Music Festival” which has a spin-off TV series called “Other Voices”. This is filmed in the intimate setting of the 200-year-old Church of St James. Performers, of whom I have heard, include Duke Special, Billy Bragg, Elbow, James Morrison, Lisa Hannigan, Mick Flannery, Imelda May & Snow Patrol. 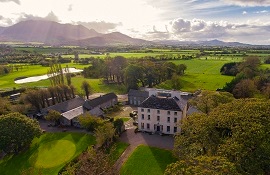 The SOUTH POLE INN, located in Annascaul, contains a collection of Tom Crean memorabilia. As well as paying tribute to Tom Crean the Antarctic Explorer, the South Pole Inn now commemorates the village’s other famous son: Jerome Connor, an eminent Irish-American sculptor. A purpose-built gallery exhibiting his work was opened in April 2014. We will be finishing up in the 18th Century Churchtown House situated in the foothills of the Macgillicuddy Reeks. The house was built in 1740 by Sir Roland Blennerhassett and has been in the Magill family since 1860. The house sits alongside Beaufort Golf Course, in the clubhouse of which we will be drowning our sorrows (or otherwise). 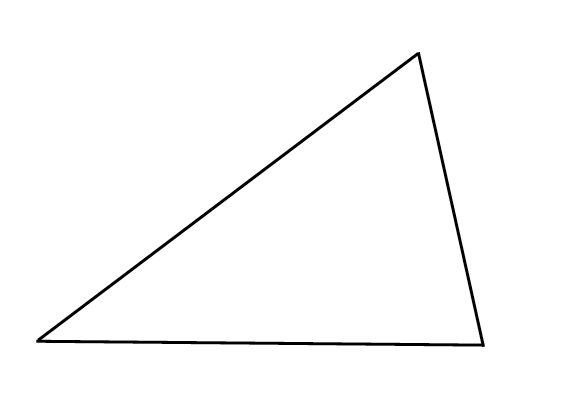 This is the same triangle that you encountered in Newsletter 1. This time, draw a line down from the top vertex so that it hits the base at right angles – this is called an orthogonal. Draw in the other two orthogonals. Lo and behold, they pass through the same point which is referred to as the orthocentre and, like last time, it is the centre of a circle – not as obvious as the circumcircle. Find out more further down. NOT BEFORE YOU HAVE A GO THOUGH 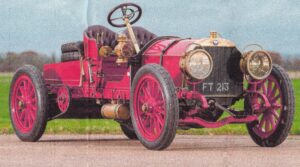 There has been an interesting recent addition to the ranks, courtesy of Peter and Luke Roberts, who have entered what will be the oldest car in the field – a 1906 Bianchi 28/40 which boasts a formidable 7400 cc engine. The car has competed widely, including twice in the SF Edge Goodwood Member Meet race, VSCC races, hill climbs and trials plus a Paris to Vienna rally where it won its class. It is an original fast Edwardian capable of well over 80 mph. The car has a past connection with Ireland as it was acquired by Jim Boland from Lord Montagu (of Beaulieu) in 1968. Jim restored the car and competed in the 1970 VCC 1000 mile trial. Peter has owned the car for seven years. In other cars, with his co-driver son and other co-drivers, Peter has competed in the 2010 Paris-Peking rally, Paris Madrid rally and several Frazer Nash events. Whilst taking events seriously, it is the joy of driving with like-minded enthusiasts that attracts him to events such as this. 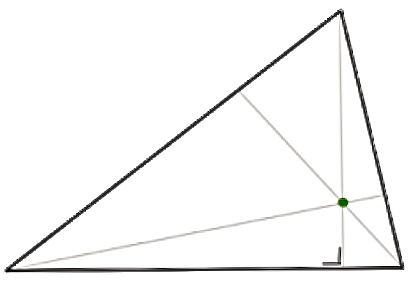 If we drop perpendiculars from each of the vertices they are also concurrent – this is the ORTHOCENTRE. 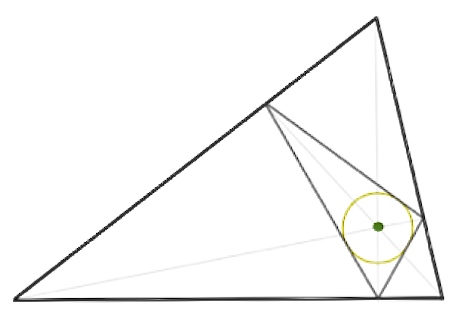 It is also the centre of a circle, albeit a slightly contrived one. Join the feet (pedes) of the perpendiculars to form the pedal triangle. Then, draw the bisectors of the angles in this triangle. Where they meet gives you the centre of its INCIRCLE. 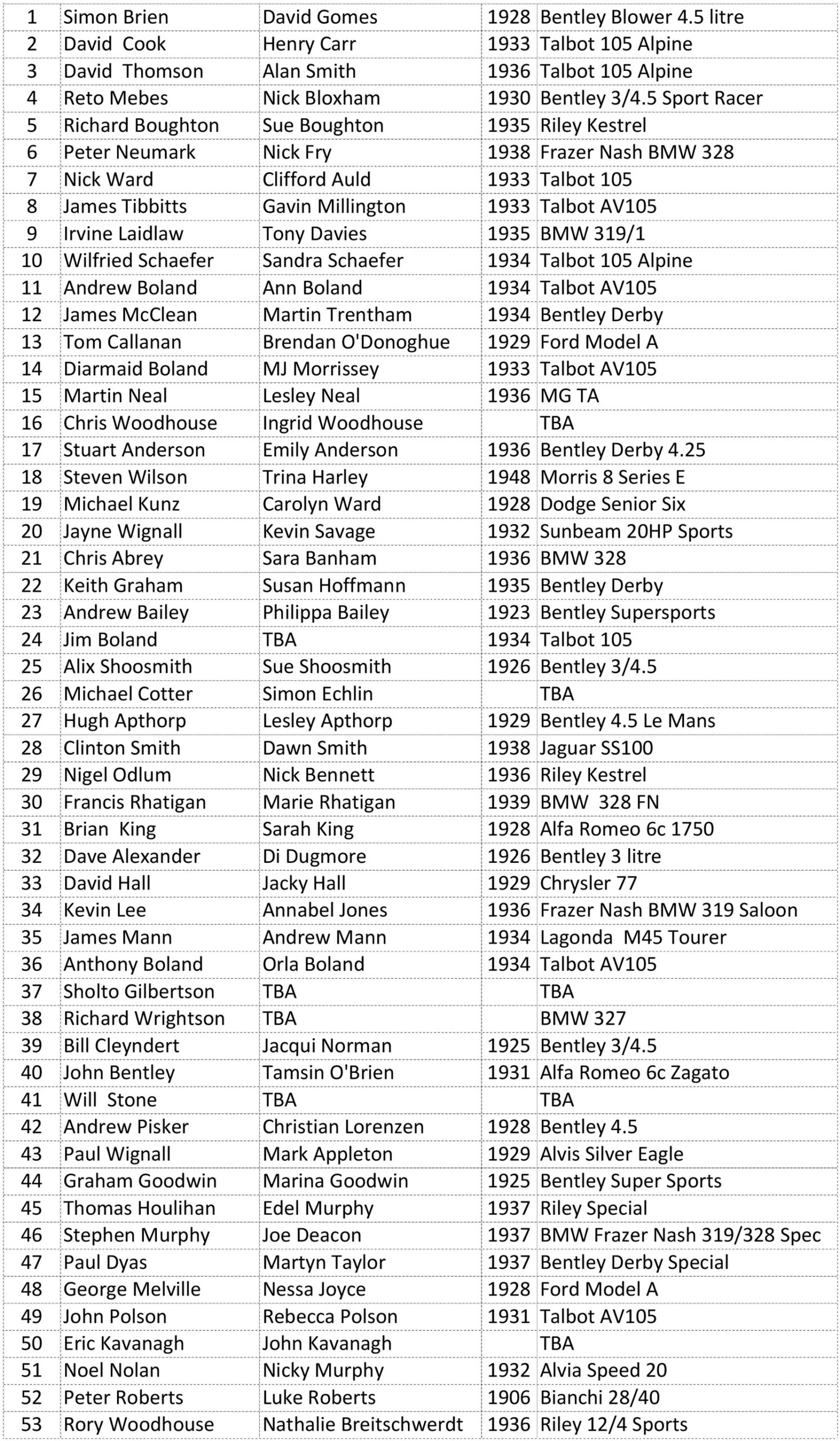