It struck me as a potentially worrying portent when, so as to keep my snail’s pace typing to a minimum that, when saving this file, I abbreviated Shamrock Newsletter to SHAM NEWS – I trust that what follows won’t be considered to be the synonymously and contemporaneously sinister FAKE NEWS.

When compiling these Newsletters one is faced with the dilemma of who/what to pontificate about. Some of you have provided information on the entry form which provides ready-made copy. Unfortunately, more words than have been supplied are required for these missives, so I feel obliged to fill it out with rather more tangential piffle than I would like.

The word “dilemma” appears above. An immediate observation is that the “di” does not mean two – it can be two or more. The “lemma” is even more intriguing (only if you are that way inclined, of course). A Greek word meaning premise, it is usually taken to mean option and an unfavourable one at that. I trust that you will find what follows otherwise.

Despite it being maybe a little premature, I would like, on behalf of Irish Racing Green, to offer seasonal felicitations to all (past, present and future) involved in the Shamrock Vintage Challenge.

I have already apprised you in previous Newsletters of some of what is in store for you in May. 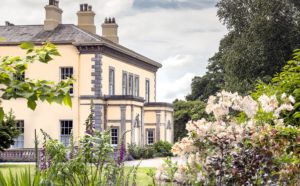 Here is a definite destination on Day 1 – Tourin. Situated on the banks of the river Blackwater, south of Cappoquin with a fine view of the Knockmealdown Mountains to the North, Tourin is surrounded by arable land and a fifteen acre garden with mature broadleaved trees and a fine collection of shrubs and plants. An Italianate style villa with classical proportions, Tourin House is home to the Jameson family, of Irish Whiskey fame. The present generation – Kristin, Andrea and Tara – are, all three, artists and passionate gardeners. Key member of the organising team Mickey Gabbett has fond memories of this place which he visited more than once in days of yore. I suspect that his rationale was not merely to admire the fine house and magnificent gardens. The Shamrock will definitely have an ulterior motive to drop in as there will be a test for you to enjoy as well as its other delights.

Just a few words about some of our competitors:

The strategy of the Boland family from Wexford seems to be that if you enter en masse, at least one of you is bound to win a prize. There are now four of them on the list! Andrew & Ann (Talbot AV105), Diarmaid & Fiona (Talbot 105 Alpine), Anthony & Orla (Ford V8) and Jim (Vauxhall 23/60). I suspect that some tweaking of the standard FIVA template will be required to include a Class B (for Boland) 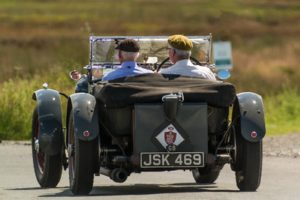 Next on the agenda is the1936 Invicta S Type of Paul Gregory & Nick Savage. In the 1950’s, Jack Earle Marsh, S Type Invicta expert and owner of S39, the exworks 1931 Brooklands Double 12 and Ards Tourist Trophy car, started collecting S Type spare parts with a view to building them up on a new chassis. In the 1980s, S39 and the spare parts were sold to Michael Bristow, the Chairman of the Invicta Car Company Ltd., and he had a chassis manufactured to exact original S Type specification by the Invicta Car Company and then a protracted build took place using the original Invicta spare parts. This chassis was numbered S302B (so that there would be no future confusion with Invicta cars built at The Fairmile, Cobham or later at the Flood Street service depot). In 1991 the car was acknowledged by the Invicta Car Club as an S Type and in 1992 the car was purchased by the present owner, Paul Gregory, previously editor of the Invicta Car Club’s quarterly magazine, ‘Invicta News’. The car has been used extensively for club events in the UK, occasional hill climbs and for European touring. More recently, the car has been used for Endurance rallying, including the Flying Scotsman, the Welsh Three Castles, the RAC 1000 Mile Trial, the Paris-Madrid and the Blue Train Challenge. Friends for over 50 years, the crew comprises two drivers sharing the driving – and no navigator! Both circuit racers with VSCC and HSCC, Paul Gregory has retired from the track but Nick still stalks the circuits in a Chevrolet Camaro. 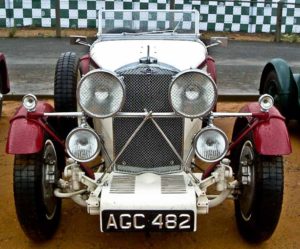 This is a picture of David Cook’s 1933 Talbot 105 Alpine. I haven’t received any information about David or the car, but I did come across this nice photograph – the wonders/invasiveness of the
Internet! I have encountered Peter Rushforth in the past. (Who hasn’t?). It was on the occasion of the 1996 Targa Rusticana which he masterminded. It was my maiden visit to the UK for a Retro Rally. Peter was very helpful in answering most of the many queries I had, given my unfamiliarity with the vagaries of the event, not to mention the byways of mid-Wales. I was navigating Douglas Richardson in an almost brand-new sixties MG Midget whose newness was not appreciated by some of the others in our class. Fortunately, from a diplomatic perspective anyway, I think it was a
condenser (certainly something very mundane) gave up the ghost on the last test and we dropped from first to about fourth. When you haven’t won does it matter?

PS I suspect that none/some/all (delete as applicable) of you will have been dying for a more extended exposition on the topic of lemmas. So as not to discommode those in the first category, I have left this bit till last.

In the world of mathematics lemma has a couple of interpretations – the first of which I will regale you with now. (I am saving the other one for the next Newsletter – just to keep you on tenterhooks.) In Number Theory, Euclid’s lemma suggests that — if a prime number p divides evenly into the product ab of two whole numbers a and b, then p must divide evenly into at least one of those whole numbers a and b. For example, if p = 19, a = 133, b = 143, then ab = 133 × 143 = 19019, and since this is divisible by 19, the lemma implies that one or both of 133 or 143 must be as well. In fact, 133 = 19 × 7. As you will probably infer, this is pretty obvious. Nonetheless, little gems like this are often required to prove more grandiose hypotheses. In this case, this property is the key in the proof of the Fundamental Theorem of Arithmetic.

Getting closer to firing up.

AC getting an oil pressure test under tow.

Michael putting the AC back together.

What a wonderful surprise to have been on the rece