“i”s are being dotted and “t”s crossed at this stage and everything is coming together nicely. What follows is my continuing crusade to whet your appetite. This, as you will discover, but not surprise, I’m sure, given my previous missives is a rather haphazard exercise. I hope that this won’t detract from your enjoyment, if any. Some of the apparently random snippets below relate to places you will encounter en route. 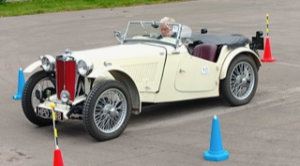 Martin and Lesley Neal will be bringing a different car to last time. Not too different, mind you. It is their white MG TA, pictured left at the California Cup event in 2021.

Other competitor news is that Mark and Susie Davenport will be joining us in their 1935 Aston Martin MK II 1.5 litre Short Chassis 2/4.For those interested in detailed information about the car, I extricated what follows from the bowels of the internet. At the risk of offending most of you, I prefer to think of it as “piffling minutiae”. Introduced in January 1934, the Aston Martin MKII was a more sophisticated design than its predecessors. Constructed using tapering channel-section side members, the newcomer’s ladder frame chassis was further reinforced via an additional crossmember and enlarged aluminium bulkhead. Rotated through ninety-degrees its twin Hartford friction shock absorbers exerted greater control over the front axle, while the use of large-diameter cable-operated Alfin drums all round meant that braking remained a dynamic strongpoint. Boasting a stiffer, fully counterbalanced crankshaft, redesigned cylinder head, Silentbloc mounts and new chain tensioner, the familiar 1494cc SOHC four-cylinder engine was both smoother and more powerful than before. Developing some 73bhp @ 5,200rpm in standard tune, it was allied to four-speed manual transmission and endowed the model with a top speed of up to 85mph. 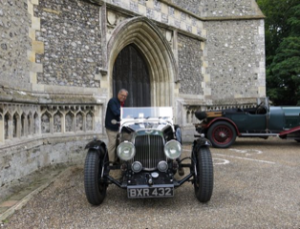 Mark & Susie have a small garage on the North Norfolk coast at Blakeney, where in addition to modern garage work, fuel sales etc. they collect, buy, sell, and support classic and vintage cars, motorbikes and bicycles. Vintage Bentleys are a favourite as Tim Birkin is buried in the churchyard of the local church – St Nicholas’s. Hence many Bentley rallies and enthusiasts come through. They prefer to be described as eager competitors rather than hardened professionals. I trust that they will find the “Challenge” felicitous. The Aston is pictured right outside the above-mentioned church. 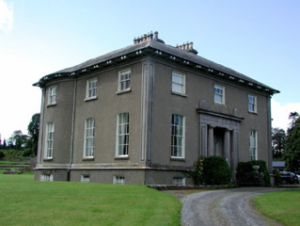 Lancelot Joseph Moore Studholme was the only son of Joseph, who owned Ballyegan Estate, King’s County (Offaly) and his wife, Mary.  (Ballyegan House is pictured left.) He was educated in England. He had a lifelong interest in gardening and won many prizes. After the death of his father in 1904, Lancelot took over his estate and became a Justice of the Peace for King’s County. He later filled the office of High Sheriff in 1909.  On the outbreak of the Great War, Lancelot joined the Leinster Regiment as a private and was later commissioned as a Second Lieutenant, finally to Captain.  He returned home for a brief period in January 1915 and visited the local school in Ballyegan where he gave the children sweets and gifts. This school had been endowed by the Studholme family to the parish. He was noted for his kindness and generosity. His final act of generosity was when he gave his life to assist his batman at the Battle of the Somme in September 1916. The batman, who was named Harte, and had previously worked on his estate in Ballylegan was wounded by a bullet. Lancelot stopped to assist him and was killed himself by machine gun fire.

The Smugglers Inn in Waterville, mentioned in the last Newsletter, has been removed from the itinerary. It is not that the nefarious activities implied by the hostelry’s name have caught up with the proprietors but, more mundanely, that a test opportunity has arisen which is facilitated by our going to The Sea Lodge for sustenance instead. 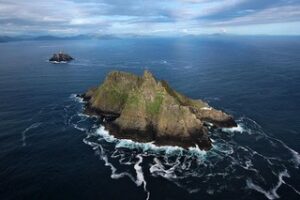 The Skelligs, a pair of islands off the Dingle peninsula, Skellig Michael and Little Skellig, have UNESCO World Heritage Site status courtesy of their ornithological and archaeological significance. Little Skellig is the home of some 27,000 pairs of gannets, the second largest colony of such sea birds in the world.The monastic site on Skellig Micheal is reached by climbing over five hundred steps up a 1000 year-old stone stairway. Stone beehive huts where monks lived and prayed centuries ago cling to cliff edges alongside oratories, a cemetery, stone crosses, holy wells and the Church of St Michael. These isolated archaeological remains show the dramatically spartan conditions in which this early Christian community lived. Enduring several Viking raids, the monks eventually left the island in the thirteenth century and it subsequently became a place of pilgrimage. It is probably better known, however, for its being used as a location for two “Star Wars” films –The Force Awakens and The Last Jedi. 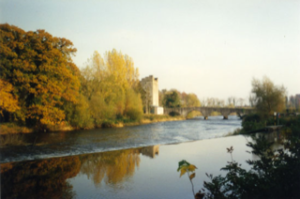 The Alexander family founded the Milford Flour Mills at Ballygowan, beside the River Barrow near Carlow town in 1790. By the 1830s the enterprise had reached a turnover of £195,000 a year. In 1856 disaster struck and the Mills were totally destroyed by fire. They had only recently been refurbished under the direction of William Fairbairn of Manchester. At the time of the fire they were capable of manufacturing from 45,000 to 50,000 sacks of flour per annum. It was thought that the fire occurred as a result of sparks, from the friction of grinding stones, igniting a quantity of corn. In 1891, the mill was modified to generate electricity and in so doing Carlow became the first inland town in Ireland or Britain to receive electric power. In the 1940s what remained of the malting building was converted into a tannery. Sheepskins from around Ireland were processed with the leather supplying shoe factories across the country. It also exported leather and chamois to the United Kingdom and the United States. Fire struck again in 1965 and the tannery closed down. In the 1990s the building was recommissioned and a concrete block turbine house added to generate electricity which feeds into the National Grid. 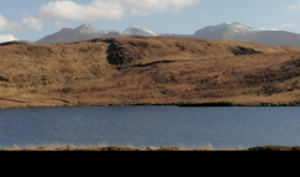 The McGillycuddy Reeks is one of Ireland’s most impressive mountain ranges. Their highest peaks can be seen here on a sunny March afternoon with a light covering of snow viewed across Lough Nakirka in Oulagh. The Climbers Inn is a hostelry favoured by walkers in the Reeks. It is also a recommended stop for cyclists, both pedal and motor varieties, as it is for those with four wheels who have enjoyed a spin over the agreeable mountain roads. You may have an opportunity to drop in here for a “quick one”. 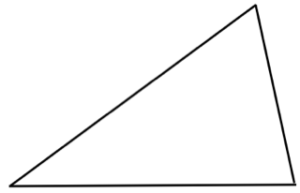 This is once more (the last time – Phew!) the same triangle that you encountered in Newsletters 1 & 2. This time, draw a line down from the top vertex to the centre of the baseline – this is called a median.Draw in the other two medians. Lo and behold, for a third time they pass through the same point. This one is called the centroid and is not the centre of any circle though there is more useless useful information to enthral you below. NOT BEFORE YOU HAVE A GO THOUGH

The centroid can be thought of as the centre of gravity of the triangle. Because our triangle is merely a shape on a page it is weightless and so can’t have a centre of gravity. Hence the term centroid. 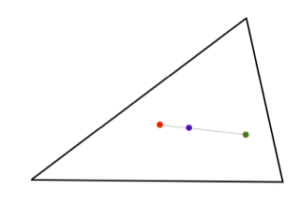 There is a corollary to all of this which can be seen in the adjacent triangle. You will remember the red dot from Newsletter 1, the circumcentre and the green one from Newsletter 2, the orthocentre. When we include the centroid, we get, not just a random arrangement of the three dots, but a straight line. And not only that – the centroid divides the line in a ratio of 2:1. How serendipitous is that?

It is called Euler’s Line in deference to its discoverer Leonhard Euler. 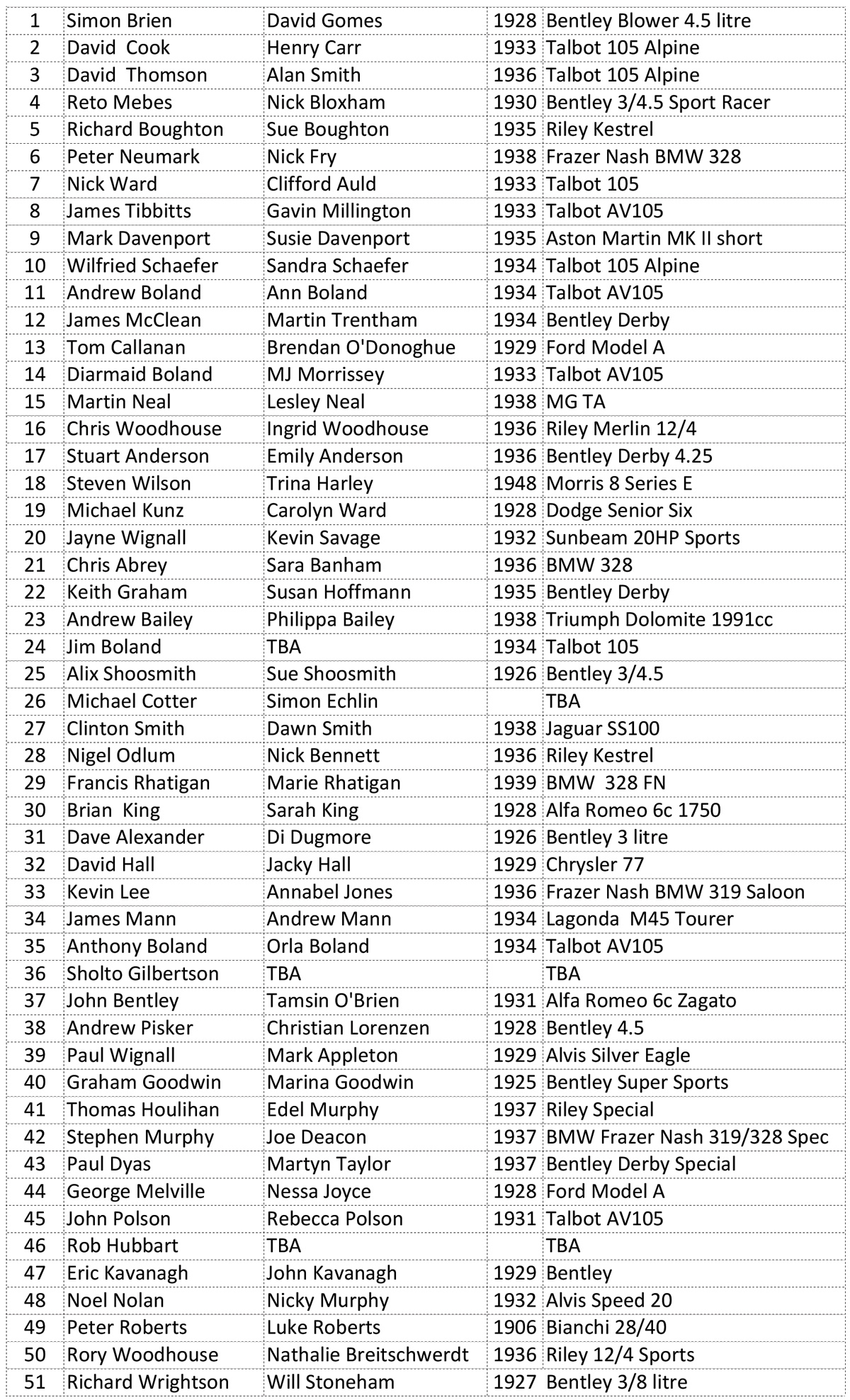